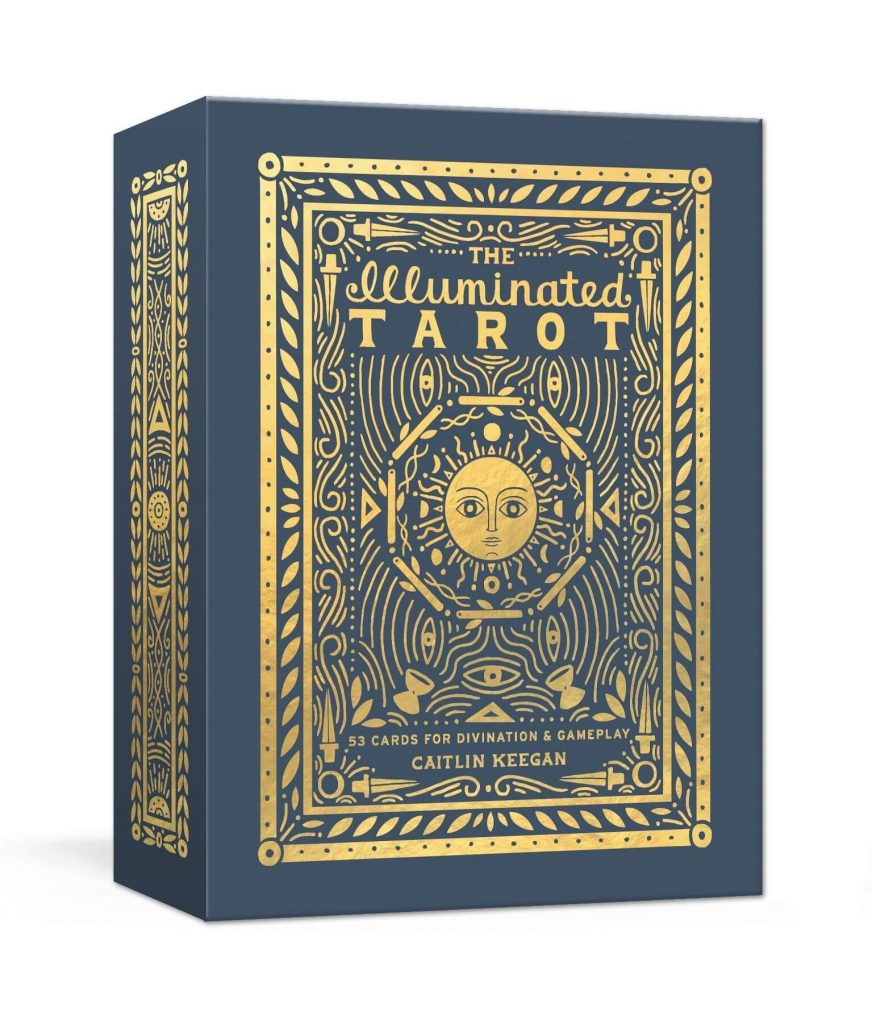 The Illuminated Tarot by Caitlin Keegan

When you first lay eyes on this tarot deck, you are unsure whether it is a book or a box. The outside packaging for this is so beautifully designed, in a dark blue colour with a design inlaid in gilt.

Upon opening the box, the inside is decorated with a variety of moon phase illustrations and hourglasses within a chess-board like configuration. There is a book inside the box, with the same image as the front of the box, this time in colour. Underneath the book is the deck of cards, 53 in all, which we will move onto in a moment.

The guidebook talks a little about the history of tarot, as well as giving examples of ways to read the cards within. The back of the cards has a beautiful design similar to that of the front of the box and book. However, they feature a star in the centre rather than the sun.

The Illuminated Tarot is an interesting deck for tarot. Most tarot decks are around 78 cards and feature both the Major and Minor arcana. However, this deck features just 53 cards. The cards are interesting because they go along the same lines as a deck of traditional card deck- with the suits of hearts, spades, clubs and diamonds.
Related to the tarot, the clubs are wands, diamonds are coins, hearts are cups and spades are equivalent to swords. Some of the ‘regular’ cards also have connotations to the major arcana.

The cards are wider than the ‘traditional’ tarot you may be used to. The Rider Waite deck for example is slimmer. Having 53 rather than 78 cards also means that it’s less to learn for the beginner. However, you have the same amount of meaning.

I’d say that going from a traditional 78 card tarot deck to using a 53 card deck is a lot easier than it may be in reverse. If you are used to one card meaning a few different things in this deck, going on to learn a traditional tarot deck may be harder after getting used to and using this deck, as the cards may not feel the same to you. However, if you already have some grounding in a traditional deck, this may actually make your readings quicker and perhaps a little easier compared to the 78 card version. On the other hand, you may also find that it doesn’t give you as much depth compared to a full 78 card deck. This, I feel, is a personal preference.

More on the creator

The designer of the deck, Caitlin Keegan, designed one card every week for a year. The result is this beautiful deck, which can be used for both gameplay and personal reflection if you so choose.
Although there are 3 example layouts discussed in the book, a quick search online will show you many different examples of tarot spreads. Even though this deck has fewer cards than the ‘traditional’ tarot decks, you can still use the same spreads.

You can find the Illuminated Tarot from http://caitlinkeegan.com via her shop, and you can also read more about her work on this project and other projects she has been/is involved with.