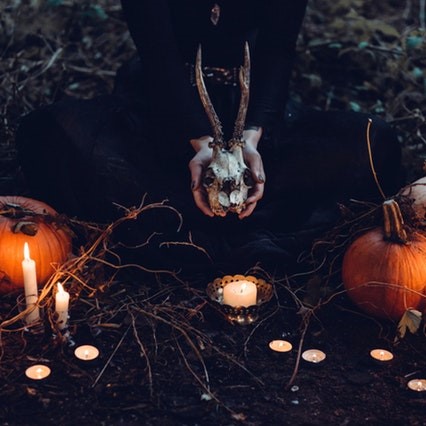 The weak sun sets upon the landscape, the working day has been done. All the last crops have been gathered, ready for the coming winter. The animals are moving up from the pastures to the sheds and stables for warmth and security as Jack Frost begins to reclaim the landscape.
Samhain is seen by many as the beginning of winter, a theory which is said to originate in the Celtic times when it would symbolise the end of the harvest where you would reap what you have sown throughout the year, and bring the animals in for over the winter time.

Going back to when the locals relied on the agricultural landscape, there were many folklore tales of what could happen to the wheat or crops if they weren’t gathered before Samhain eve on the 31st October. Some say that the harvest which was left after this time would be ruined by the faeries’ destructive nature- blasting every growing plant with their breath, blighting any nuts and berries which remain on the hedgerows. So anything that was not gathered by this time was deemed lost to that year and not to be used for any purpose.

Samhain is seen as one of the ancient fire festivals, and a bonfire would be lit to celebrate the turning of the wheel toward winter. The reasoning behind burning the bonfire goes back in part to the original meaning of the word ‘bonfire’ which is ‘Bone-fire’ or a fire where bones are burned. The local community would gather at the local bonfire area to burn crops and animals as part of a ritual to honour the lives of the animals and the bounty of the harvest, but also to give to their gods and goddesses as thanks for a great harvest season, or perhaps as a payment for a better harvest the next year.

The celebrations of this time of year were great, the people who attended would wear fantastic costumes and dance around the fire, telling stories and honouring the cycle of life through their stories or small plays. Honouring the dead at this time was, and still is, a great part of the celebrations. The costumes which were worn could have been in order to honour these spirits in their passing on to the next place, but also worn to scare off any malevolent spirits who may choose to interfere with the next year’s crops or the goings-on of the community.

The veil between the living and the otherworld is seen as particularly thin during the weeks before and after Samhain, but specifically on the night itself. This veil thinning can help diviners see the future in the tools they used. Many would ‘read the bones’ which means exactly what it says- the diviner would have a set of bones which they would use for divination purposes to help people with questions about their futures. As well as divination, there was also a chance with the local shaman or druids that they could commune with the spirits which were passing over from this world to the next over the seasonal celebration.

The essence of Samhain is remembrance, unity and the passing of the dead into the otherworld. It’s a great time to look back over the year at things we’ve done, said or started, and see if the next year can be any better. This ‘moving on’ from issues or situations could be the original inspiration behind the New Year resolutions- unfortunately, many people don’t end up keeping their New Year resolutions from January, but perhaps people may be able to keep them if combined with a ceremony like Samhain.

It’s the time to start settling down ready for the winter- make sure the heating works, or that you have enough logs for the fire over the winter. To ensure no drafts will disturb you over the next few months. It’s also about getting used to a new routine, as in many parts of the world the clocks will change by going back one hour near to the end of October- so the nights will be darker earlier. This also means that if children go trick or treating, it would be going dark (if not completely dark) by in the UK- so they need not go out so late doing this.

The origins of Trick or Treating are said to be ancient- going back to the Celtic times. Many would dress up for Samhain celebrations and festivities, but the act of trick or treating is to welcome whoever comes to your door, no matter how they look, as they may be a God in disguise. It’s said to date back to the Middle-Ages when children and poor adults would dress up and do a dance or perform a song in exchange for food or money. Nowadays, it is heavily commercialised and though some may make their own costumes, many can be bought cheaply from shops. The expected treat wouldn’t be a pastry or something wholesome either anymore, it’s expected that trick or treaters would get a bucket full of sweets and chocolate by the end of the night.

Any homes that do not have sweets or treats to give will still give a silver coin too, just to stave off the threat of a trick. This could also be tied into the tradition later in the year of wassailing or singing Christmas carols around a town or village in exchange for donations. Previously, it may have been for the community, but now it commonly goes to charities. The dressing up is not just a guise, but is also seen as dressing as a ghoul or ghost- the chances of meeting a ‘real’ spirit or ghost during Samhain is increased compared to the rest of the year, so being a convincing ghoul could help if coming across a particularly evil spirit.

The songs and prayers were often in exchange for something called a ‘Soul cake’. These would often contain spices associated with the season, including nutmeg and cinnamon, and would be decorated however the individual wished. The most common representation of a soul cake now is one that’s sectioned off into four quarters with raisins over the top. A light, spiced treat for people at this time of year to enjoy on their walk around the community.

It is souling that is thought to have given rise to guising, or trick-or-treating as we know it by now, and it may have travelled to America in the late 19th or early 20th century by Irish and British travellers. It is said that the version of trick or treating we have today was a skew on the original form of guising, where you would perform songs or prayers on behalf of the dead in exchange for treats, and has been replaced by the more consumer-led version coming over from the United States in response to a different culture- it’s said that the practice of trick or treating didn’t become popular or heard of until the 1980s in the UK.

It can be difficult for children nowadays to go trick or treating safely- many of the older children will skip the whole process and instead start vandalising areas, using ‘silly string’ on windows and also throwing eggs and flour at windows, cars and even passers-by. This can make it scary for the younger children, who in the UK seem to prefer going out when it’s still slightly light outside. Another issue is the vast size of some estates and areas to walk around. You will end up with a full bag of treats, but it may take you a good few hours to get around the whole area!