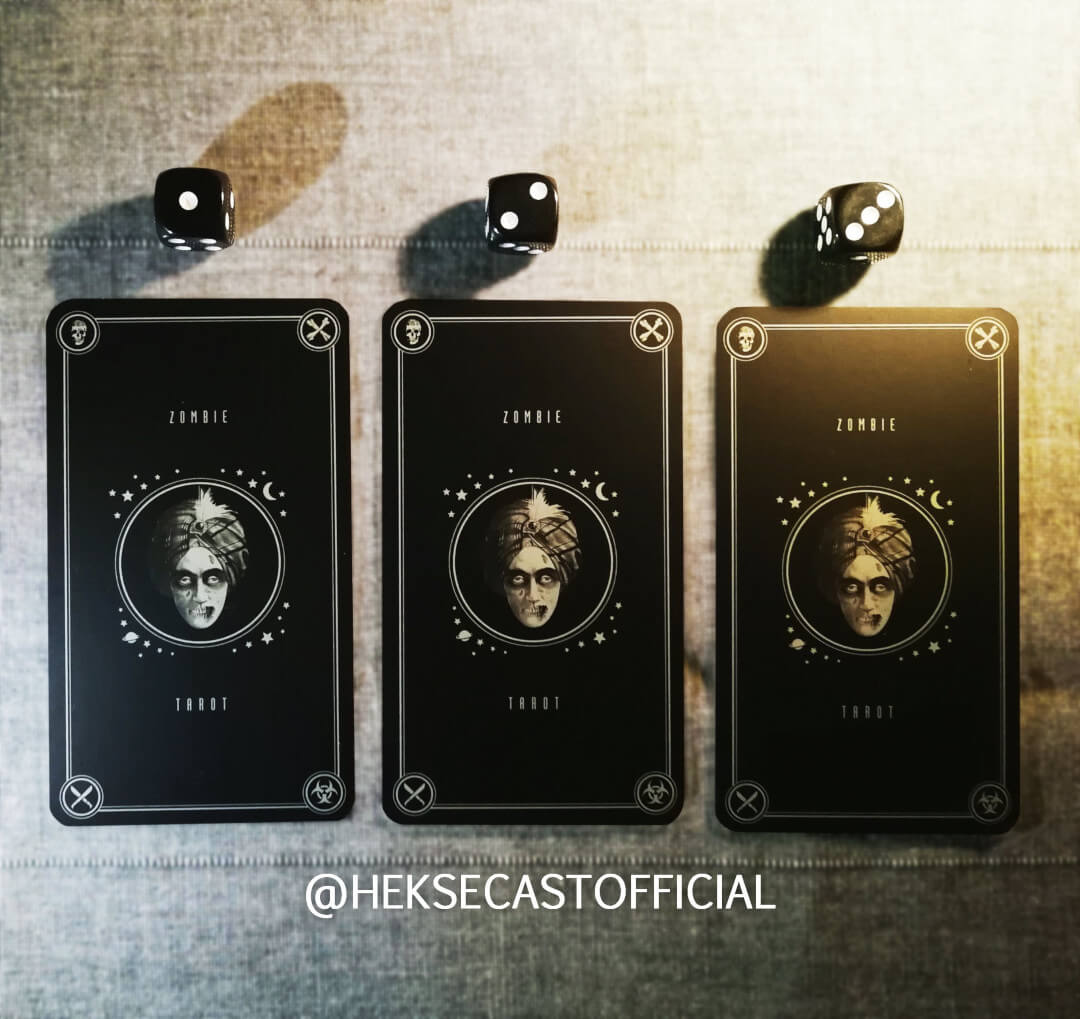 This week’s tarot cards are from the fantastic Zombie Tarot deck. You can get these cards from many retailers, both online and offline. They add a bit of retro fun to a spread, as they feature an ever growing zombie outbreak in the face of the apocalypse. What better weapon to have against the undead hordes than a pack of tarot cards, featuring a box which looks like an old ammunition box?

So, onto this week’s ‘chosen three’ cards. You can see the image below of the cards. See which one resonates with you, and then be sure to read on for the reveal!

These are the three cards from the Zombie Tarot. Once again, we seem to have a tie between the most chosen cards. So we will take them in numerical order as to the most popular. The two most chosen cards are number one and number two. Number three is a close contender, but there is a difference, thankfully.

So, we shall begin with revealing card number one below.

Number One – Five of Cups

This card is commonly seen when things have not gone your way, or if all seems lost at the moment. It could be the culmination of things not working out as you wished they had, or simply the loss of a great idea.

Focus now on what went wrong – but do not spend too long grieving this lost aspect, as the world will move along without you in it.

You may be stuck in the past, unable to move on, or simply let go. No one is suggesting you forget – just to let go and live. Learn from the mistakes, learn from what didn’t work out.

Remember to live in the present and not allow the past to drag you down.

Things are waiting for you; new, shiny things. But only once you have accepted what has happened and made steps to move on in life will you reap those rewards. Blessings may be hidden in disguise, but you are too caught up in your own sadness and grief to notice new opportunities.

The next card which was most popular is card number two.

Transition is afoot. It could be a rite of passage or a release of baggage from past dealings. Change is not to be feared, and this has long been in the works. You may be moving house, changing your job, or you may be moving country. You are leaving what was seen and considered as familiar and taking a step (or leap!) into the as yet unknown.

It may bring you sadness to take this much-needed step into the unknown and into new territories. However, you know in your heart of hearts that this is the right path on which you need to follow.

Stepping away from things which no longer serve you – be it a relationship, job, house or country – will benefit you in the long run. A lot of the time, we are sentimental beings, and we tend to choose to hold on to those things which may not actually serve us. However, a change is as good as a rest, and things will settle down once more.

It can be easy to dwell on things which once anchored you as you move into your new life. This card gives you permission or instruction to move forward without looking backwards. You made those choices because they needed to be made. Holding onto the past is not going to do anyone any good, especially you.

Through this inner reflection, decide what you want to hold onto in your new life moving forward. Do not take what no longer serves you, mentally or physically.

The final card is number three.

This is a card which symbolises some form of deception or trickery is afoot. It may be that you are sneaking around, doing things which you perhaps shouldn’t, whilst hoping beyond hope that these things do not see the light of day.

It’s also a possibility that you are the one being manipulated. You could be dancing to the tune of someone else’s beat, so to speak.

It is a very difficult game to play if you are deceiving others. If you are especially unlucky, it may be that you will be caught in the act, and your true self will be revealed.

You may be on the receiving end of this deception, trusting someone who you think is genuine and honest, but being stabbed in the back when you are not looking. This could be through any number of things – infidelity in a relationship, or just someone trying to gain and hold the upper hand in a situation of power.

The main thing to remember with this one is to listen to your gut. If something or someone seems too good to be true, then those things likely are. Instinct is a very strong tool, and this card is telling you to start using it.

It can also be symbolic of being able to use the ‘backdoor’ to get results that you want. Perhaps you are able to take a shortcut in whatever you are doing in order to get what you need, without going down the traditional routes.

You also need to keep an eye on any potential workloads. We can only do so much as humans, and the more we take on, the worse the end results are likely to be. If you have ‘bitten off more than you can chew’, as the saying goes, you may not be able to focus fully on the tasks you need to get done, and instead end up worrying about them.

This card can also be related to procrastination. Are you putting things off that you really should be getting on with? Are there tasks or assignments you should be doing, but the cleaning or watching a movie seems that bit more important at this moment in time? Cut the crap and get on with what you should be doing. You’ll thank yourself later!

So which card did you resonate with? Let us know how your week goes in relation to this!